Your First Look at The Menu And Floorplan For Sterling's

Share All sharing options for: Your First Look at The Menu And Floorplan For Sterling's

Sterling's is hurtling towards the Financial District with an anticipated December opening, and the restaurant's owners have shared an exclusive look at a draft of the menu and plans for your viewing pleasure. According to an official release, the restaurant will open on the main floor of 60 State Street with decor inspired by men's fashion from the 1960's. In the words of designer Kelly Laurence: "If the room was a person it would be wearing a felt fedora, pin stripe suit and sitting at the long bar appreciating a whiskey cocktail." In other words, expect tufted banquets, patina tin ceilings, herringbone tiles and chestnut wood - you can glean further details, like the walnut drink rail and 1960's headlines on the wall, from a close look at the floorplan, above. Mike Barry of Granary Tavern, which is also owned by the Glynn Hospitality Group, will manage the bar. And the food?

The team describes the working menu as "Retro-American" featuring "all things Julia Child." Some sample items from a draft of the menu: chicken liver pâté crostini with gooseberry compote and pickled onions; shrimp flatbread with Mornay sauce, herbs and black pepper; a croque monsieur; beef Stroganoff; Jameson bread pudding. For a look at the still-in-progress menu, see below. 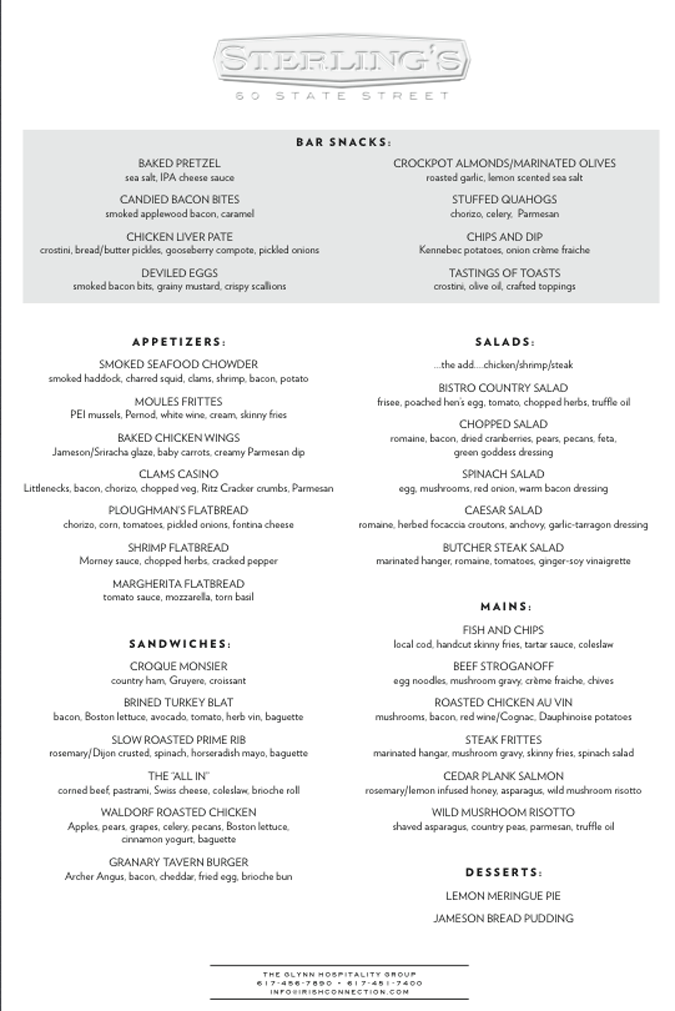 Update: This post was updated to include additional references to the fact that this version of the menu is a draft and still a work in progress by chefs Wilson and Talbot.