A Mini-City in Chinatown; The Neighborhood of the Year

Share All sharing options for: A Mini-City in Chinatown; The Neighborhood of the Year

Presenting the first of many weekly contributions from Curbed Boston: Curbed Cuts, all the latest neighborhood news... 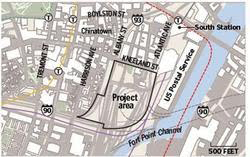 CHINATOWN/SOUTH BOSTON - Massachusetts wants to sell 20 acres of the city between Chinatown and Southie to build a mini-city of hundreds of apartments and the retail, including restaurants, to service them. The first development bids are due March 25.

SOUTH BOSTON - More than 1,700 apartments in several towers (with restaurants and other retail at their bases) are about to change Whitey Bulger's old 'hood forever.

EAST BOSTON- Meanwhile, Eastie is just A-O.K. with Mayor Menino's plans to turn it into the next South Boston (i.e., make it suitably acceptable to big-spending hipsters).

SOUTH END- Ladies and gentlemen of the Hub, your 2011 Neighborhood of the Year.