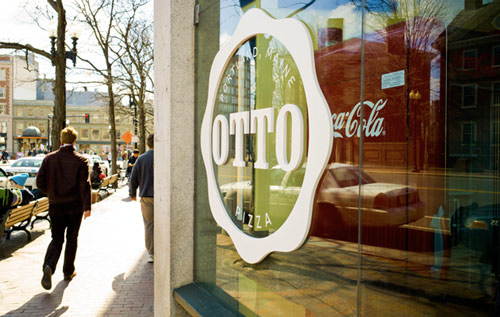 Anthony Allen co-owns Otto Pizza along with Mike Keon. Otto started as a darling of the now legendary restaurant scene in Portland, ME, and tomorrow marks the anniversary of its fourth location in Harvard Square. Despite the fact that Boston wasn't exactly hurting for pizza, Otto managed to make its mark and quickly become a local favorite. In fact, they're even considering opening a similar venture elsewhere in the area. Here's the story of Otto's first year in Cambridge, as told by Anthony:

How did you pick Cambridge after Portland? I was a commercial broker in and around Boston for about eight years. I basically sold and leased restaurants, so I had a pretty deep familiarity with sites that would be good for our concept. In Portland we had a little tiny shop with a lot of foot traffic, and Harvard Square is like the mother lode of that. It's probably the best site north of New York City for our business model.

Remind us what was here before? It was a Finagle A Bagel location. It just never caught on there and my partner and I, we knew with absolute conviction that the site was going to pop for us and that we'd do well there. A lot of people told us the rent's too high, the space is too small, no way, no way, no way, there's too many other pizza shops, and we just knew it in our blood that the thing would work well there and it's met our expectations and is beginning to exceed them.

How was the build? Fairly easy. One of the compelling things is it was already vented, it already had a lot of the mechanicals in place, and so we just did a cosmetic refit. We stripped back some sheetrock that revealed a beautiful brick wall - that was a no-brainer - and we like using reclaimed materials, so what we use for a counter was a cart in some steel foundry in Pennsylvania. Somebody had it converted to a tabletop counter and we bought it from that somebody.

How does the design compare to the original location? The Harvard Square location is modeled after the original: walk in, order, walk out all within hopefully about a minute. We've done some studies watching the sidewalk in Portland and people will be nose-down texting or in conversation, and they'll walk in there and order up a slice and walk out a minute and twenty seconds later. We see some of the same people two or three times a day in Portland. Harvard Square is a little more transient. We do have regulars, but there's just so much new traffic being flushed up from the T every day that it doesn't have the same small town feel as Portland.

Did you have any delays? We opened late January last year and the ambient temperature outside went down to zero a couple of nights, and the heat wasn't working in the shop and we lost a sprinkler. That set us back about a week or so, but beyond that everything was pretty smooth. Of course we lost the sprinkler after all the painting had been done and everything, so we had to re-sheetrock and repaint.

Did the sprinkler burst? It just burst, because the internal temperature of the shop got below freezing. It was a hell of a moment to see. It flooded the sidewalk and as soon as the water ran under the glass front it froze, so it was just a giant skating ring outside of the shop and it was just one of those nightmare stories, but not so bad. We only lost one sprinkler head and the fire department came pretty quickly and turned the water off.

How was the opening? Smooth. Mike and I know what we're doing, and we were able to execute the thing. It's a really efficient model: you don't have to take more than two steps to get anywhere and we can produce and fire out as much product as we need. We had a free slice day in April and we gave away 1600 or 1700 slices within a four hour period. That was a hustle. I think that sort of kicked us into gear pretty hard.

Did you have to make any changes to the menu after opening?
We really just have one product. One thing we did was swap out Coca Cola. They were really excited to be in our shop and were really hounding us, but it never really seemed to match with our brand, so in late April we started brewing our own iced tea and lemonade and we offer those Otto-brewed beverages in the display case with water and sparkling water. We test some pizzas and move things and change them up a little bit, but it's basically the same menu. We're always testing and introducing new pies, so there are three or four more flavors that you may see there out of about 28 to 30 varieties.

What's the feedback been like? Oh, great. We generally get four or five stars on Yelp. On the free slice day I was working the counter; I was actually exhausted. One of the last people that came in asked for a vegetarian slice, I gave her one that I thought was vegetarian, it turned out it had chicken on it, she hammered us on Yelp. It was a free slice, it was an honest mistake, I'm really sorry I made the mistake but I think that's the only one star thing we've had on Yelp.

Did things slow down at any point during the year? They did. My buddy Tom at Crema Cafe told me between Christmas and New Year's you can almost close down, I didn't believe him, but he was right. It really slows down over that holiday: the whole square just flushed out. But then early January it just picks right back up again.

Does it feel like it's been a year? It really does not. It's really flown.

Any plans for additional locations? There are, we're really close to another location. It will be a 60 seat deal, same pie, some sort of elevated salads, beer and wine, and we'll know within a couple weeks whether that's going to come together for us. And that's in Brookline.

Is there a must-order dish here? The Food Network filmed us in May for our mashed potato, bacon, scallion slice. In the right weather that's a killer slice, it's like a meal on wheels. In Harvard Square the butternut squash, cranberry ricotta is probably the favorite slice. A cheese slice is kind of what my partner Mike and I always go for. The cheese is just... it's a bitchin' cheese slice.

For more One Year In posts published today across the Eater Universe, head over to Eater National.