Share All sharing options for: Leigh Belanger From Chefs Collaborative on Sustainability

As we head into 2012, Eater was curious to know what the future holds for sustainable food. We checked in with Leigh Belanger of the the Boston-based Chefs Collaborative to get her perspective. Her upcoming book Boston Homegrown is due out this April and profiles local chefs and the food producers they work with. 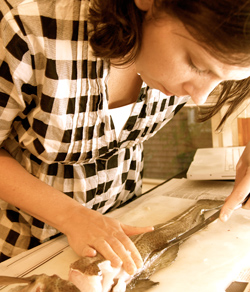 So what is Chefs Collaborative's role in the Boston dining scene?

We're a national non-profit network of chefs and culinary professionals working on sustainability issues in restaurants. Our headquarters are here and we have a network here and we've always had a presence in Boston since we were founded in the 90's. The chair of our national board is Michael Leviton, so obviously he's based here, and our network leader is Rich Garcia of 606 Congress.

To bring chefs in the area together to either discover new sources of food - always an exciting thing - or to troubleshoot challenges and share best practices for what they're doing in their restaurants, meet-ups with producers, that kind of thing. We also collaborate with other people who work in the food world here, whether that's Edible Boston or Farm Aid or the Boston Food Policy Council or Future Chefs.

If you look at any one food there are so many factors, but for people who are interested in trying to tease out the different nuances of what makes a food sustainable, one of the things to consider is the impact of production on the environment, the impact of production on workers, on public health, and on communities as well. If you think about foods that have positive impacts on the environment, job creation, public health and sustainable community development, that's a good if complex way of figuring out if a specific food is sustainable.

How do you recommend that diners figure out which restaurants have sustainable practices in place?

I definitely recommend that people try to approach restaurant eating with some empathy toward chefs who are making purchasing decisions every day. What a lot of our members talk about is that the first rule of sustainability - and again this is such a fluid concept - is keeping the doors open. You can tell a lot from just reading a menu and from educating yourself about the issues. I don't think, for example, that much of service is done if a diner whips out a seafood wallet card and holds it next to the menu and sort of goes down and checks something off. It's a lot more complicated than that and the best things for diners to do if they are concerned is to ask their server, to send an email to the chef or the owner of the restaurant and to bring an understanding with them when they sit down and look at the menu.

What are some Boston restaurants that deserve to claim sustainability?

Obviously our board chair, Area Four and Lumiere. I think Russell House Tavern is another one that's doing a really great job, because he has to keep a price point that will work for that concept but is also constantly bringing in vendors and you do see really interesting items on the menu that show that he's using ingredients in very inventive ways that help him stretch food costs and work with local producers. 606 Congress is doing a great job with sustainability on their menu in the restaurant. And Rich Garcia, the chef there, is working hard on the banquet and hotel menus, as well. But there are lots of people who do it who have been doing it all along and for a lot of new restaurants it's just part of the business model.

What are some of their practices?

When I talked to Jason Bond for my book he said you work on these parallel tracks: one is that you just start reacting to what's coming into the market and featuring those products as they cycle through the year. The other is preserving a lot of food that you're constantly stocking the pantry with so that when the seasonal food starts to wane, there's still a lot of choices.

Do you think sustainability has been watered down by its increasing popularity?

With the word itself, although the definition is pretty straightforward, the applications are sort of endless. When you're talking about it in terms of food, the more people see that they have some marketing leverage when they talk about sustainability in terms of their business, the more it gets used, and the more the application gets sort of fuzzy, and the more people who are truly practicing it have to figure out a way to differentiate themselves from people who are just in it for the money.

Organic.. local... seasonal... sustainable... is there another buzzword on the horizon?

It's a good question, and as somebody who works in this world, I hope that there isn't another buzzword. They become meaningless in a way because people are applying them in very different ways. I think that one trend I have seen recently is in talking about traceability, especially in seafood. I'm sure you've heard about Trace and Trust and Wild Rhody. Those are small initiatives that are actually growing really well. So traceability and transparency are both important and people are starting to pay more attention to those concepts. I don't know how much traction they have as buzzwords, but they're great.

How do you think the definition of sustainability will change in 2012 and beyond?

I don't think the definition is going to change because it is what it is, but I think that hopefully the applications will change. I think it's becoming easier for chefs, if we're strictly talking about restaurants. In the past 10 years the landscape has changed so dramatically in terms of what ingredients are available, and a lot of chefs coming up now have worked in restaurants or gone to culinary school and learned this stuff. So it's already sort of in their DNA. Our vision is that sustainability will be second nature for every chef in the United States. That these values will become part of what we do. And it becomes easier, or at least a little bit less complex, for larger restaurants and larger restaurant chains to adopt some of these practices as well.

What are some specific practices that we'll see more of this year?

I think you've been starting to hear more about chefs getting involved with food production. Chefs who are fortunate enough like Frank Mcclelland to have a farm where he's working on the farm and growing a lot of produce for the restaurant. I do think that rooftop gardens and rooftop honey and cheese making in-house are things that we've already started to see but will probably just continue to grow. Though obviously not many chefs can have chickens in their backyards.

What was your favorite sustainable restaurant meal of 2011?

I always fall back on my two favorite places, which are The Gallows and Hungry Mother. I love The Gallows because he again is super committed to his vendors and forms really great relationships, and you can tell by the quality of the ingredients that he cares a lot. His food is straightforward and delicious and I think very seasonally nuanced, and Hungry Mother is just always a favorite because I think Barry has a very personal touch, and I love that. I love to see that personal vibe coming through loud and clear and I know he also has a big commitment to vendors and producers that he works with. But... (laughs) I've also been doing a lot of cooking at home.