Staff Meal's Adam Gendreau on His Letter to The City

Share All sharing options for: Staff Meal's Adam Gendreau on His Letter to The City 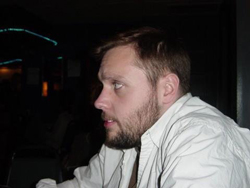 Over the weekend Staff Meal food truck co-owner Adam Gendreau let loose an open letter to the city of Boston that aired some critical thoughts about how the city's food truck policies affect operators. He wrote "Despite the media portrayal that the food truck industry in Boston is thriving, the reality is that the city hasn’t implemented a system that will allow food trucks to succeed." The letter was reposted by several sites and launched a flurry of impassioned comments. Eater caught up with Gendreau to hear more of his thoughts and to learn what the responses have been like.

Tell us about the Greater Boston Mobile Food Collective that you started earlier this month.

James DiSabatino from Roxy's Grilled Cheese and Travis from Grillo's Pickles and I just decided that there's a huge lack of communication going on in the mobile food community, primarily because we're all operators and we all spend a lot of time with our business so it's very easy to have a centric view. We figured a good way would be to set up a knowledge-sharing type collective in order to facilitate that communication a little better. The whole point is to generate a general consensus through communication about how this industry should go.

And how should this industry go?

My open letter on the website addresses a lot of that, but basically there was a disservice done to the industry in kind of sprawling it out. I feel like there needs to be a little progression in terms of spots that have been chosen. We need to focus on one area like either Back Bay or the Financial District where there's known, regular lunch business so that we can all have a little bit more predictable revenue. Hopefully we'll get to that point but for now we're just kind of looking to make ends meet.

So you're looking for spots in more vital parts of the city?

Yeah, more spots that have known success with the lunch rush.

Are you involved with the discussion about bringing the trucks to Brookline?

No, we're not. We've read the transcripts from the city's meeting and it doesn't seem like the city's ready to take that program seriously so we're not really interested in that. The spots that they chose, there's zero percent chance that any truck would be able to survive.

When Eater spoke with someone from that initiative they said they city was keen on picking spots that wouldn't compete with brick and mortar restaurants.

Oh yeah, we think that's a valid concern, but it might not be as valid as the city thinks it is. All the feedback we've gotten from restaurant operators is that food trucks are more that welcome in any part of the city. That being said it wouldn't benefit anyone if we set up in front of a restaurant selling similar food, but that's common sense. So it's a valid concern, but we think that they're kind of making a mountain out of a molehill. So I think if anything the dialogue needs to be open between city, truck operator, restaurant operators, anybody. And really that's the whole point of the collective: to have anybody and everybody that has an opinion.

It's been incredible. Over the last three days we've received about 9,000 hits to our website. You can check out the comments, they're all publicly available, anybody can comment. It seems like most people agree with my thoughts. There is some feedback from restaurateurs on there as well, which is awesome, but it's been mostly an agreeable comments area, which is awesome, because that's how we generate a consensus opinion. We talk about everybody's individual problems and needs and concerns and then we're able to bring that to the city and actually solve problems that exist instead of creating problems that don't exist. We're just trying to serve food off a truck here. It's nothing terribly groundbreaking. It's not like we have a culture or an industry to make huge waves over, it's just about eight of us that are trying to make a living.

Was there anything else you wanted to add?

What's that? I'm near a generator.

[Louder] I said was there anything else you wanted to add!

You know, I want as many people to look at that letter as possible. Is it contrarian? Do you agree with what I said? I want to hear any and everybody's feedback from any industry. If it's a cab driver, I want to hear what you have to say. That's the point of the collective, we can't marginalize anybody's opinion.

On another note, what are you serving today?

We're doing tacos as we would do them so they're not in any realm authentic. We take from kind of a global cuisine, so we took the tournedos sandwich that we were doing on the Titanic menu, which is shaved roast beef, foie gras-truffle demi-glace and artichoke, and put that in a taco. We also have a pig ear taco that we sold a ton of today.