Share All sharing options for: Bondir's Erin Reilley and Her Peek at Guchi's Ramen

This is The Gatekeepers, in which Eater roams the city meeting the fine ladies and gentlemen that stand between you and some of your favorite impossible-to-get tables. 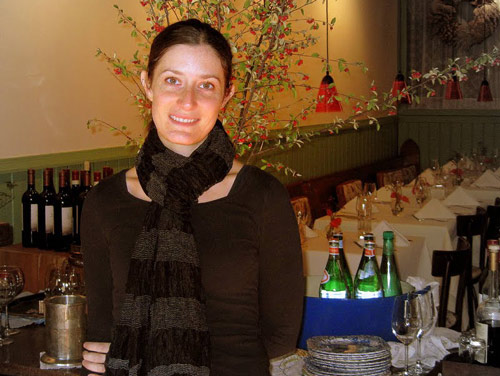 Bondir thought it could be just another intimate, Cambridge restaurant serving refined but straightforward cuisine inspired by the local bounty. And then Bon Appetit stuck them on its list of "The Best New Restaurants in America in 2011" and then... boom! Things just haven't been the same since. Erin Reilley is the critically acclaimed restaurant's general manager by default: she's the only manager. She's been there for three months, and before Bondir she worked for three years as a manager at Hamersley's.

What's the busiest time of the week? Currently we're almost at capacity every night. I guess that Friday and Saturday feel a little bit busier, mainly because of the crowd that comes out on those nights. We're so small that we're pretty much full every night.

How many seats are in the dining room? Twenty-four.

What's different about that Friday/Saturday vibe? I think that people who like to dine out on Friday and Saturday night have different expectations. It's their one night out during the week so they're really looking for the perfet overall experience. Often they're traveling from a little farther away, maybe coming into the city just for the night.

Where are they coming from? From all over the country. We take all of our reservations over the phone, so we either see it on caller ID or find out from conversations with people. A lot of people reference the Bon Appetit article, still. I think we have somebody coming in this week from Oregon, we have people coming from Canada, people who are just in town for business for one week and are trying to get in. Georgia, a lot of people from California.

What's the craziest thing you've ever seen pop up on the caller ID? A lot of foreign numbers are crazy. My favorite is "Boston Red Sox." I always make an effort to answer the calls from Boston Red Sox. It's usually the Boston Red Sox foundation.

Do people also just show up and try to get a table? People do but I think less that at most other restaurants. There isn't a lot of foot traffic in this neighborhood and I think most people probably realize that it's more of a reservation type of place. Sometimes people do get lucky and walk in and we have something available, but unfortunately we don't often.

If someone showed up at 7pm on a Friday night, what are their odds of getting a table? Generally we would probably tell them to try back at 9:45. They could get lucky and somebody could cancel last minute or not show up, otherwise at 9:45 or 10 we usually have availability.

How far in advance do people have to make reservations? For the prime times, like Saturdays, 7:30 to 8:00, like three or four weeks.

How would you describe your clientele? I think our clientele is generally well educated not only in whatever field they're in but in food as well. I think they have an appreciation for what we're offering.

Does that also make it more challenging to serve them? I don't think so, actually. I think it's more rewarding.

What would you say is the strangest request that you've accommodated? It maybe isn't strange exactly, but one of our requests was for a mini, two person wedding cake for some folks who were getting married and just the two of them were coming in here for their wedding reception dinner. Just them. We put together a beautiful mini version of a wedding cake.

Was there a little miniature bride and groom on top? Actually they brought their own cake topper.

What's the most popular dish right now? People get really excited about our scallop dish. Our dishes change a lot but at the same time it's the protein that changes more than the accompaniments. So I would say something like scallops, or the mallard duck, which we've now changed to a bigger duck than the mallard, which we were previously using, but oddly enough I think the beet salad is probably one of our most sold dishes. It's more regularly on the menu than most, but in a given night we probably sell more beet salads than anything. It's a spice poached beet with greens and then right now we have a blood orange-pistachio vinaigrette, but the dressing does change. And right now we have a little bit of quinoa with it too.

It was before your time, but do you have a sense of how things changed once the Bon Appetit listing came out? I do. It's kind of legendary. Things just exploded. I mean, we can still feel the impact of it now, so I can only imagine the phones just ringing off the hook. It really got the name out there, everywhere, all over the country; it's pretty amazing, really, the scope. Not only was the article published in Bon Appetit but they've run it again in USA Today and talked about it on Good Morning America, so I think the number of people who have come in contact with that list is really enormous. It compounded the effect.

What's it like working with Jason Bond? It's pretty amazing. I think this is one of the only places I've ever worked where I feel like everyone who works here feels lucky to work here.

With sustainability being such a big feature, do you have a problem with mushroom foragers coming in and trekking mud all over the floor? (laughs) Yeah, not only mushroom foragers but squash brings a lot of dirt. We have people caked in dirt trampling through here all the time. The farmers are really excited about it too, so it's really great.

Any celeb sightings? I think we may get a different kind of celebrity. Cambridge celebrities. They're more scholastic, accomplished professors and authors and people who are celebrated in the business world. Not really familiar face celebrities.

We just heard about the Guchi's Midnight Ramen testing. Will you be there? Yes, of course! They came in and did a staff meal for us one day so we could know the product, and it was really incredible.

When you're not at Bondir, where do you like to go? One of my favorites is Estragon in the South End. I live right down the street from there so it's very convenient for me, but I think their food is fantastic and their staff is one of the most welcoming, lovely staff of any restaurant I've ever been to.

What's the must-order dish at Bondir? When we have the Wagyu beef brisket, if you don't order that when it's on the menu, you're crazy. It melts in your mouth. It's so amazingly delicious.