Remembering the Biggest Dining Surprises of 2011

Share All sharing options for: Remembering the Biggest Dining Surprises of 2011

As is the tradition at Eater, our closeout of the year is a survey of friends, industry types, bloggers, and readers. We've already covered Best Standbys, Top Newcomers, Best Neighborhood and 2011 in one word: now it's time for some surprises.

Q: What was the biggest dining surprise of 2011? 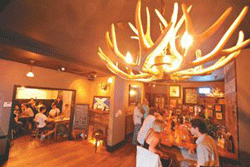 Devra First, restaurant critic, food reporter, The Boston Globe: The Kendall Square explosion. For so long, the area seemed ripe for a real restaurant scene, but developments came in fits and starts. Then, boom. And not necessarily a surprise, but worth mentioning in contrast, is the way the South Boston waterfront developed. It was a big, brash transformation, focused around chain restaurants – the mirror image of the spirit in Kendall. I don’t knock it. For the city and the businesspeople involved, it’s a great economic boon. People are flocking there. It’s just not the kind of area I gravitate to personally, and I could see things having taken a different direction, one more embracing of independent, unique venues.

Tom O'Keefe, BostonTweet: The haggis at The Haven in JP. It's actually quite good.

MC Slim JB, restaurant reviewer, Stuff Magazine, Boston Phoenix: I was amazed that the local industry was so robust, that new openings appeared to outpace closings despite the stricken economy.

Penny and Ed Cherubino, BostonZest: Back to the food trucks. We’ve been amazed at the great meals we’ve had from The Dining Car, Go Fish, Staff Meal, Red Bones, Silk Road BBQ, and Roxie.

Rachel Leah Blumenthal, Fork it Over, Boston!, restaurant reviewer, CBS Boston: I'm pleasantly surprised that the city is finally really getting on board with the food truck thing. It has definitely been developing over the past couple years, but it really exploded this year.